Dr. Masgutova had just finished her Ph.D. at the Scientific Research Institute at the Russian Education Academy in Moscow (1988) and began in her new posts as Post Graduate Lecturer for the Psychology Department at Orechovo-Zouevo State Educational University and the Early Education Psychology Department at Moscow Open State Educational University (both in 1989) when news hit the Russian media regarding the tragic train accident outside of Ufa, Russia.

Dr. Masgutova joined the large team of medical professionals, leaving their posts to come and help the survivors through the event’s aftermath. It would be months before she would return home. When she arrived to help, had she not been familiar with the learning and reflex theories of Vigotsky and Sechenov, the idea of engaging movement to enhance recovery might not have entered her thoughts. Facing the tragic circumstances with ingenuity, she built on simple movement and tactile activities, hers and the children’s (as they were able), to draw out many psychologically trapped children. The results were nothing short of amazing with psychological, emotional, and physical recovery times far faster than expected given the level of trauma.

The Ufa Train Catastrophe ultimately became a watershed event in Dr. Masgutova’a life as she came to understand that while she had a promising University teaching and research career at the Russian Education Academy, she could do more to help challenged children and adults by understanding, refining, and educating others in neurosensorimotor integration. Consequently, she left the University and Academy setting and devoted her life’s work to the study and treatment of challenged children and adults, and to teaching post-graduate professionals her MNRI techniques. She also began to lecture upon invitation at many Universities and clinics in many countries.

A Review of the events

Beijing, China, June 3, 1989
The government of China sends in troops to force protesters out of Tiananmen Square after 7 weeks of occupation. Media outlets worldwide focus on this event. A picture of a protester standing in front of tank kept the world from wanting to learn much more than what had led up to the event, what was happening now and what did this mean for China and it’s relationship to the world. As a result, few, if any, heard about one of the largest train catastrophes of all time.


MOSCOW, Russia June 4, 1989
Media reports were released regarding a tragic train crash outside of Ufa, Russia. Russia’s tragedy is reported around the world, but lost under the shadow of China’s Tiananmen Square incident. Following is a New York Times report by Bill Keller of the train crash. 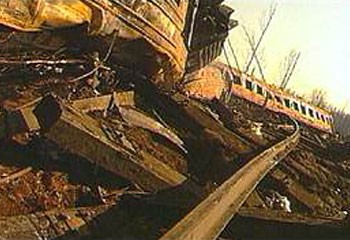 A powerful gas pipeline explosion demolished part of the trans-Siberian railway late Saturday night, engulfing two passenger trains in flames and leaving hundreds dead, according to the Tass press agency and local officials reached by telephone. President Mikhail S. Gorbachev and several other top Soviet officials flew this morning to the site in the Ural Mountains, where rescue workers were struggling with what Tass described as ''a major catastrophe.'' A civil defense official in the nearby city of Ufa tonight estimated that 500 of the 1,200 passengers had been killed in the explosion. A Soviet reporter in another nearby city, Chelyabinsk, put the death toll at 650. Many of the victims were children bound for holiday camps by the Black Sea. Disaster Was Saturday Night. Tass said the disaster occurred late Saturday night between the cities of Ufa and Asha, when a liquefied natural gas pipeline that runs near the tracks erupted in a mighty explosion just as the two trains were passing in opposite directions. Mr. Gorbachev, in an interview broadcast on television late tonight, said that apparently gas from a leak in the pipeline accumulated in the gully through which the train passed, about half a mile from the pipeline. ''And when the train passed by, a spark set off the explosion,'' he said. ''It was a real hell there.'' Visibly frustrated by what he said appeared to be another case of negligence, the Soviet leader added, ''I have to say this: I believe we are being persecuted by these events - first one, then another. Many of them are caused by mismanagement, irresponsibility, disorganization.'' Smell of Gas in the Air

Vitaly I. Cheripanov, the Chelyabinsk correspondent for the Communist Party newspaper Pravda, said rumors of sabotage were widespread among the local population, but that officials seemed persuaded that the explosion was accidental. Mr. Cheripanov said officials reported that an engineer on one of the trains had smelled gas in the air before the explosion. Military detachments and medical teams were mobilized, ferrying severely burned victims to hospitals in several cities and arranging accommodations for hundreds of desperate relatives who poured in to seek news. ''Military units are combing the nearby woods and mountains in the hope that some passengers managed to escape the whirlwind of fire,'' Tass said. Soviet television tonight showed unusually graphic scenes of the aftermath - dozens of acres of forest charred to the ground, passenger cars crushed and blackened by the blast, children with severe burns being rushed from helicopters to hospitals in Chelyabinsk. A television reporter said the explosion blew out windows in Asha, about eight miles away. Monday was proclaimed a national day of mourning, with flags to be lowered and entertainment programs canceled. The authorities canceled the planned resumption Monday of the national Congress of People's Deputies that has been laying the groundwork for a new Soviet government.

The two trains were traveling between the Siberian city of Novosibirsk and the southern Russian city of Adler, near the resort town of Sochi on the Black Sea coast. At this time of year, those trains would normally be filled with families going to and from their holidays and with children bound for the large Pioneers holiday camp at Artek, on the Crimea. #109 Survivors Are Children Boris A. Sochilov, a civil defense official, said 109 of the 469 hospitalized survivors were children. The accident paralyzed traffic on an important leg of the trans-Siberian railroad and presumably will mean a major disruption in energy supplies until the gas supplies can be rerouted. The explosion was the worst known railroad disaster in Soviet history, and the latest in a series of catastrophes that have battered the country as Mr. Gorbachev tries to repair its ailing economy.

First the Chernobyl nuclear accident in April 1986 dealt a severe setback to the Soviet atomic energy program.
In September 1986, a Soviet cruise ship, the Admiral Nakhimov, collided with a cargo ship in the Black Sea and 398 were killed. Then last December a devastating earthquake shook northern Armenia, claiming 25,000 lives and requiring the complete rebuilding of several cities and villages. Ethnic clashes in Armenia, Azerbaijan, Georgia and now Uzbekistan have also contributed to a sense that the country is deteriorating faster than Mr. Gorbachev can fix it. Tass said Mr. Gorbachev had left for the scene this morning along with Prime Minister Nikolai I. Ryzhkov, Defense Minister Dmitri T. Yazov, Health Minister Yevgeny I. Chazov and others.