Why Reflex Integration is Important

The nervous system contains many specialized subsystems, each moderating and coordinating a broad range of specialized functions in the body as outlined in the following table (for more information go to Reflex Physiology & the Nervous System): 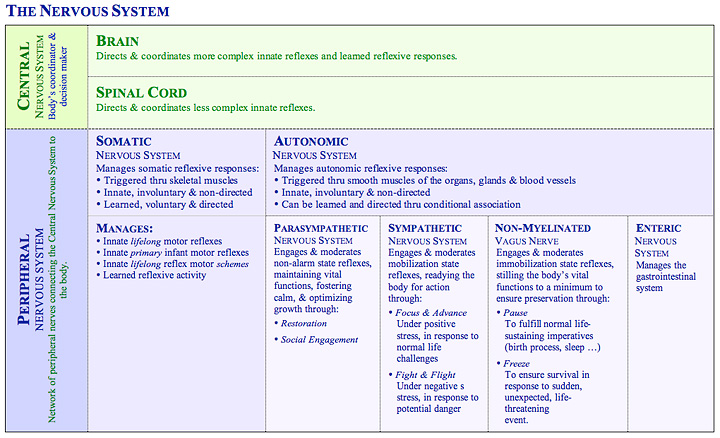 While each subsystem is responsible for specific functions, the integrated nature of the nervous system links and coordinates subsystems to ensure and optimize the body’s overall long-term, near-term and immediate survival; using information from one subsystem to moderate, balance, and optimize the function of the remaining systems. As we learn about the intra-functional, specialized role each individual subsystem plays it is important to remember that the functional health of one system can impact the functional health of other subsystems as well as the efficiency and effectiveness of the body’s overall function. It is because of the intra- and inter-functional roles played by the subsystems that primary infant motor reflex integration can:

As simple as it may seem, understanding the integration state of primary infant motor reflexes can arm professionals and caregivers with the knowledge necessary to address the underlying cause of emotional and behavioral regulation issues as well as maturational and developmental motor, communication, and cognitive challenges.

Integration can only occur when the neural, sensory, and motor circuits, supporting the function of each primary infant motor reflex, are functioning in a healthy manner. A malfunction of any one of the underlying circuits can result in a dysfunctional or pathological primary reflex. Because the nervous system is internal and so expansive, it is not easy to uncover the hidden problems that can exist within its complex structure. Dysfunctional and pathological primary infant reflexes help to isolate and reveal where in the body neural, sensory, or motor response bottlenecks exist. As a result, when professionals and caretakers use Masgutova Method techniques to isolate neurosensorimotor challenges and to facilitate the integration process, underlying issues related to the nervous system are also addressed. Because nervous subsystems play both an intra- and inter-functional role, the integration of even one primary infant motor reflex can often address a much broader cross section of challenges. For this reason, the more neurosensorimotor bottlenecks that can be identified through dysfunctional and pathological reflexes, the greater the possibility of improving a person’s overall function.

In the same way primary infant motor reflex integration can be used to signal and isolate underlying neural, sensory, and motor response issues, emotional and behavioral dys-regulation can be used to signal autonomic system challenges in moderating and coordinating the body’s internal alarm states. The autonomic system, when moderating and coordinating internal states performs its role in response to external cues from the environment, allocating more or less control to one of three subsystems based on the level of familiarity, the potential for danger, and the immediacy associated with a challenge or threat, as outlined below.

1.   The parasympathetic system is allocated predominant control in response to normal/familiar:

2.   The sympathetic system is allocated predominant control in response to novel/unfamiliar:

3.   And, the system managed by the non-myelinated vagus nerve is allocated predominant control in response to:

The respective changes in the environment that trigger each autonomic subsystem to establish a predominant internal state in the body, also trigger the somatic system to engage in a particular set of reflexive motor movement responses.  When both systems are functioning, as they should, the emotional and behavioral tone of somatic motor movement responses align rationally with the internal states moderated and coordinated by the autonomic nervous system.  Because of this relationship, when primary infant motor reflexes are dysfunctional or pathological, the autonomic system’s ability to appropriately moderate and coordinate internal states and regulate emotional and behavioral responses can be compromised.  When the function of the autonomic system is compromised, emotional and behavioral responses often appear to be out of proportion relative to the magnitude of a change in the environment or general event. The impact of a compromised autonomic system on general internal states can result in responses that can range from being over-vigilant to being under-vigilant.

The following three tables provide a general characterization of the impact the autonomic nervous system can have on the parasympathetic system, the sympathetic system and the system managed by the non-myelinated vagus nerve, when autonomic function is normal versus when it is compromised. 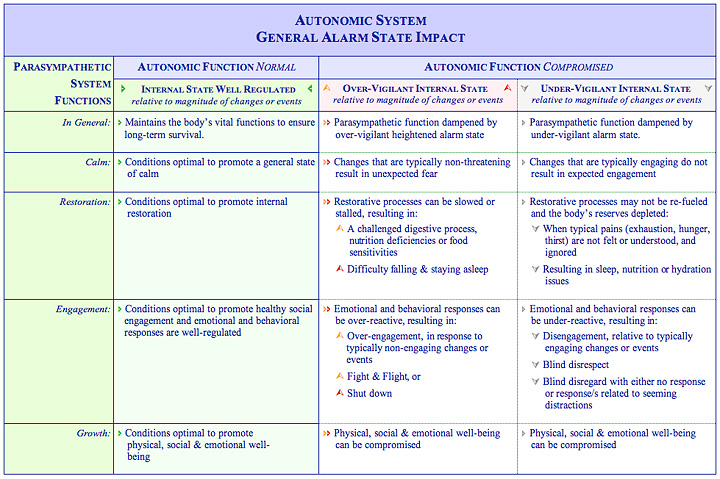 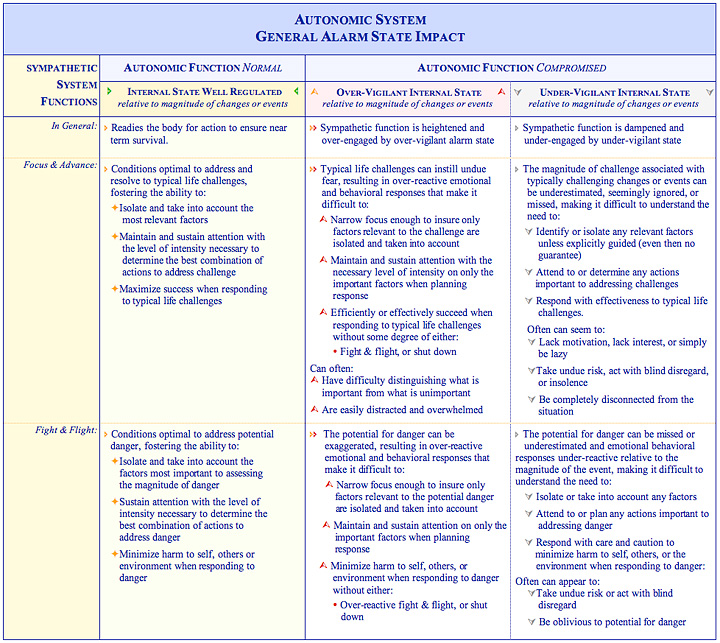 Autonomic nervous system function and the system managed by the non-myelinated vagus nerve: 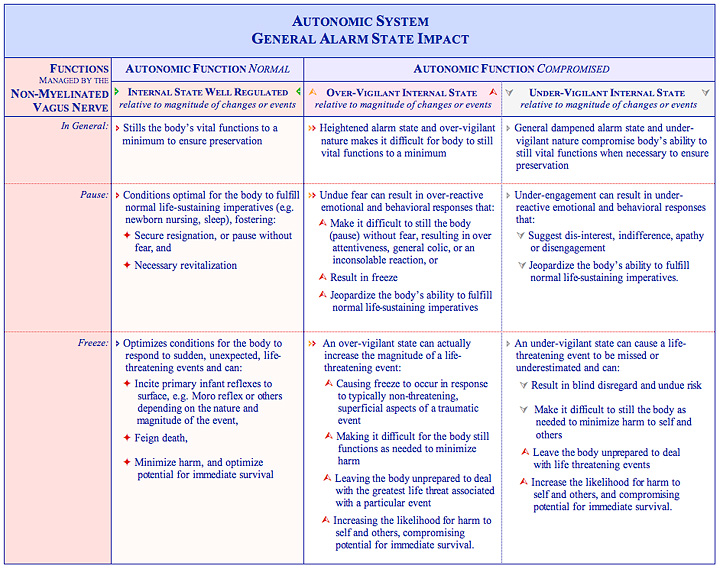 The sibling relationship that exists between the somatic and autonomic nervous systems, as the two major subsystems of the peripheral nervous system, intimately intertwines their function.  The autonomic and somatic systems work in a symbiotic fashion, each to inform the other, to ensure the body’s long-term, near-term and immediate survival, while optimizing the potential for development and growth.  It is through the healthy function of these two systems that the optimal foundation emotional and behavioral regulation and  motor, communication and cognitive maturation and development is best positioned to allow each of us to reach our full potential.