«Back To Examples Of Reflexes

Autonomic reflexes are moderated and coordinated in a hierarchical, integrated fashion by three subsystems of the autonomic nervous system:

The autonomic system can engage simple responses at the local level, involving only part of one neuron and at the regional muscle level, coordinated and directed (mediated) only by the autonomic ganglia; or engage progressively more complex autonomic reflexes as the autonomic ganglia work in conjunction with the central nervous system at the spinal cord level, brain stem level, and higher brain levels to coordinate and direct more complex reflex responses. In general, the higher the level of complexity, the more likely the reflex will require coordination of not only the sympathetic and parasympathetic responses, but with somatic responses as well.  (R. Rhoades, D. Bell, Medical Physiology, Lippincott, Williams & Wilkins, 2009, Third Edition, p. 118).  The following summary characterizes in more detail the hierarchical levels of autonomic reflexes. 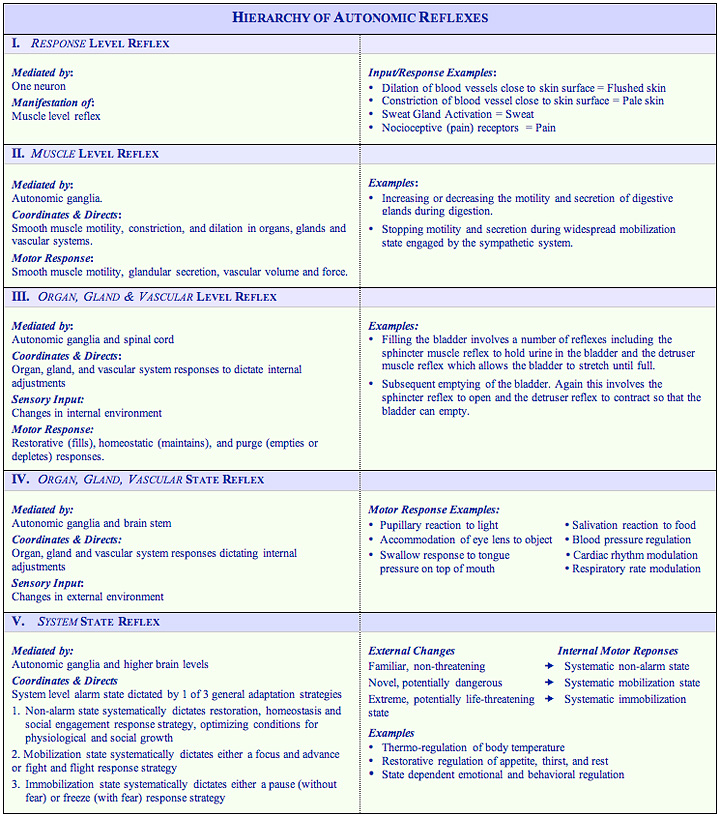 While both systems work continuously at the localized level, only the sympathetic system has the capacity to produce widespread responses in the body. The body when faced with novel, potentially dangerous changes in the environment triggers widespread control. When this occurs, the body adapts what is called a mobilization strategy, readying the body to respond quickly and efficiently to deal with the pending challenge.  This state can be engaged when faced with challenging tasks mobilizing the body to focus and advance to complete the task or when face with real danger mobilizing the body for fight or flight. Regardless of reason, for mobilization, the sympathetic system takes over on a widespread, global basis slowing or shutting down unnecessary processes to recruit and allocate the body’s resources to mobilize. The following chart summarizes how the parasympathetic and sympathetic systems influence a cross section of organs, glands and vascular systems when each is in dominate control. Click on the body part impacted (internal effector) if you would like to know more about its function.